Windows 8.1 is finally upon us. Windows 8, which was
released back in October of 2012, received much heat over the removal of the
Start button and the introduction of the Start Screen, among other things. This
update to Windows 8 is set for release in a few days and will not only bring
back the Start button, but provides all the necessary improvements and
consumer-requested features to Windows 8. 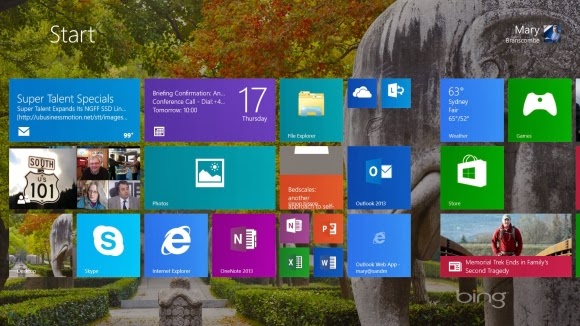 The new update may look and feel just like Windows 8 at
first, but there are some key additions that are worth knowing about. Here’s a
roundup of our favorite new features to debut with Windows 8.1.

The Start screen has a few improvements. You get two new
tile sizes: one small square one and one large one, so you can configure the
Start screen a bit more like Windows Phone 8. You can also select multiple
tiles and put them into a named group, and swipe up gesture for the “All
Apps” view. The All Apps view has a few new organization methods, too—you
can view them by category, most used, and date installed, not just
alphabetical.

The new Start screen has more colors to choose from, and you
can even put your desktop wallpaper behind the Start screen as well. You can
also turn the lock screen into a photo slideshow, sourced from your PC or
SkyDrive. While you’re on the lock screen, you can launch the camera or answer
Skype calls without logging in.

One of Windows 8’s coolest features is the side-by-side
window snapping, and Microsoft has made a big improvement to this feature: now
you can resize those snapped windows however you want. Before, you could only
have Windows split 50/50, or into thirds. Now, you can actually drag the slider
to make each app take up as much or as little space as you want.

Furthermore, you can have more than two apps or windows
on-screen at once—in fact, you can have up to four, as long as your monitor is
big enough (Engaged reports that the Surface Pro is still limited to two). You
can also move them between monitors, if you have more than one.

Improvements to the Windows Store and Built-In Apps:

Windows 8.1 also comes with some handy improvements to the
Windows Store and its built-in apps. The whole store has been given a face-lift,
and it will now automatically update your apps unless you’re on a metered
connection. Internet Explorer 11 now has unlimited tabs, the camera has a
panorama feature, and the new Mail app will have a “sweep” feature
that deletes multiple emails of the same type (e.g. newsletters). All apps are
supposed to be faster, and push notifications are easier for developers to
implement, so hopefully more apps will support them.

Microsoft has also made a big update to search in 8.1 If you
open the search charm, you’ll see that all your search results are grouped into
one place: no more switching between files, settings, apps, and the web. If you
press enter, you’ll be taken to a full-screen view of your search results. If
Bing understands the person, place, or thing you’ve searched for, it’ll load a
full-screen app-like view called “Search Heroes,” with intelligent
results similar to Google’s Knowledge Graph, that offers photos, videos, and
relevant facts all in one unified interface.

Show the Apps View on the Start Screen:

Technically, this is a Modern feature, but it exists to make
desktop users’ lives easier. Right-click on the taskbar and head to Properties
> Navigation. From here, you have a few options:

Show the Apps View automatically when I go to start: This
will show you a more navigable list of apps when you head to the Start screen.

Search everywhere instead of just my apps: This mimics the
old search behavior in the Start menu. With this selected, you can just press
the Windows key and search for any app, file, or other location on your system
without having to click categories like in Windows 8.0.

List desktop apps first in the Apps view: This ensures your
desktop apps don’t get pushed down when you head to the Start screen, which is
handy if you use the mouse to launch them.

How Often Should You Clear Your Browsing History On iPhone?