Since the release of the first Company of Heroes in 2006,
World War II games have fallen out of vogue. Actually, since Spielberg lost
interest post-Pacific, World War II media has taken an apparent backseat to
modern warfare. Between 2006 and today, game development tools have become
exponentially more sophisticated.

Company of Heroes 2 feels like a moment from 2004’s military
history zeitgeist (three words I resolve to never place end to end again), and
not only because it’s one of a sparing few games still tonally driven by tales
of the courage of the common Allied non-com in WWII, but because it’s a WWII
real time strategy game. That is, it’s a game about the value of the soldier in
which the soldier is also little more than an expendable tool. Maybe that’s the
point. 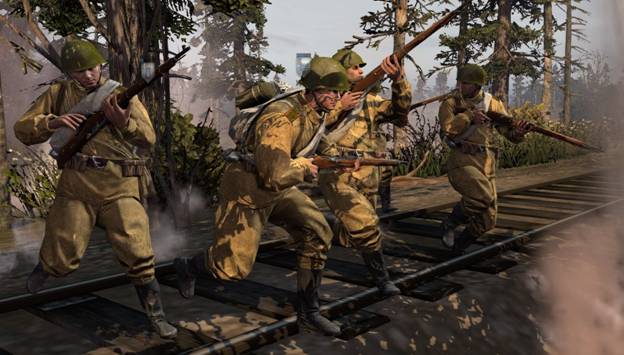 Company of Heroes 2 casts you in the role of a nameless
Soviet or Nazi overlord with the ability to control any unit of the same
nationality as they battle through the harsh winters of the early war on the
Eastern Front all the way to the top of a crumbling Reichstag at the close of
the European Theater. As with any RTS, my power is absolute, and terrifying.
“Run directly into that artillery barrage, comrade!” You find yourself yelling
at your computer screen. “For the motherland!” it yells back… 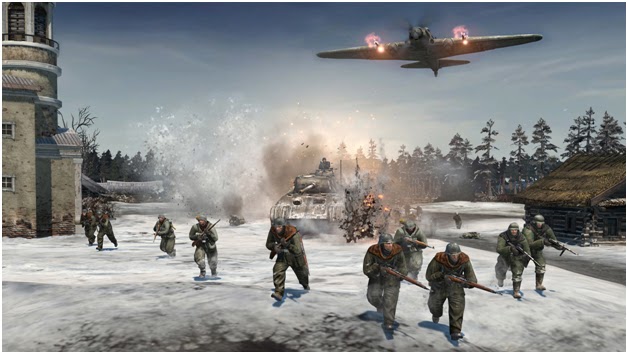 Company of Heroes 2 makes units more expensive than most RTS
games, and emphasizes tactical micromanagement of each. For example, when
raiding an enemy MG trench, I might post up a mortar crew nearby, then send in
a conscript squad to gain a visual, now made more realistic with a
line-of-sight system. While the mortar crew starts raining shells, I could
switch back to the conscripts to find some cover and throw a Molotov cocktail
to flush out the nest. Then I might even remember that I have an armored
half-track that shoots flames twice its own length, and support that menace
from a distance with a long-range Howitzer I captured earlier. The Rock, Paper,
Scissors formula is preserved, and made interesting by its unique interplay and
historical context.

Even with all this complexity and careful balancing, Company
of Heroes 2 doesn’t stand out as an essential RTS game. It’s a little brother
that looks and sounds a lot like his successful, handsome big brother. So for
those who never knew old Company of Heroes, Company of Heroes 2 will be the
refreshing surprise that its predecessor was seven years prior.

Company of Heroes 2
was developed by Relic Entertainment and published by Sega. It is available for
the PC.
Genre:  Real-Time Strategy